Vanessa Woods is a Bay Area artist whose work utilizes subversive associations to reimagine and decontextualize contemporary and historical narratives. We spoke with Vanessa as she prepared for the October 9th closing reception of her Emic/Etic show at a.Muse Gallery, which features work from her March 2016 Super Classy Publishing book of the same name and will feature live readings and poetic responses to her work by seven Bay Area writers.

What was the initial inspiration for Emic/Etic?

I had been working on a small series of collages created with material sourced from 1940s issues of National Geographic, so by default the collages had an ethnographic “look.” When Super Classy Publishing approached me about making a book, I reflected for a long time about what I could do that could harness the potential of the book format in an exciting way. Ultimately, I came up with the idea of creating a fictional dossier of an invented tribe, with the book serving as the format in which I would present the invented artifacts and images of this tribe. I imagined what a 1940s ethnographer might have in his dossier and began thinking about the visual language and systems of classification used by anthropologists/ethnographers. From there I went and sourced anthropological books, maps, etc. and began to reconfigure them to be my own. Part of that process was erasing all evidence of place, manipulating scale and origin, re-drawing maps and creating idols/totems that are mash-ups of diverse histories, cultures and populations.

It’s impossible to imagine anything being completely objective. At their best, ethnographic interpretations are perhaps somewhat objective. Systems are put into place by anthropologists/ethnographers that aim to prevent implicit biases, but in the end western ethnography has its roots in white colonialism. I think that voice, and the role of ethnography, is changing to be inclusive of other voices/perspectives now, but its origins are certainly rooted in a biased point of view that aimed to keep the hierarchy of power in the hands of white males. 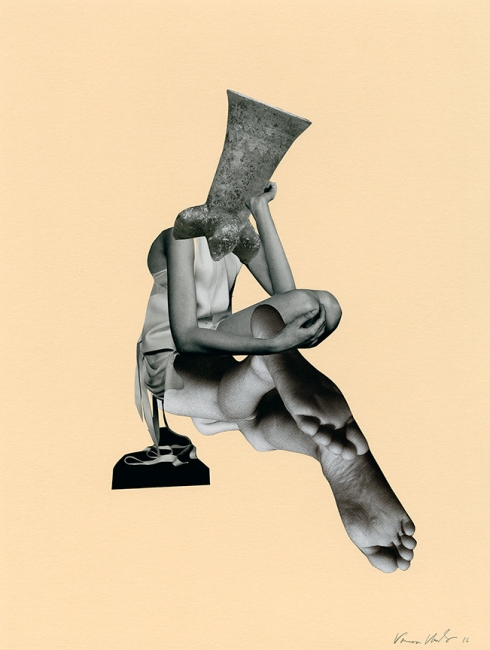 Talk to me about the title of the show: Emic/Etic.

My goal with Emic/Etic was to examine the complexity and failings of western ethnographic interpretation that is poised between scientific objectivity and moralistic storytelling. The title Emic/Etic confronts the complicated nature of ethnographic research. Anthropological in origin, “Emic” field research refers to an account of a culture derived from people within the culture, while “Etic” field research refers to an outside scientific observer describing a culture’s behaviors or beliefs. So the title of the book, and corresponding show, speaks to the liminal space between insider/outsider, subjective/objective that is a fiction in of itself.

What does it mean to use collage for this subject matter?

My collages utilize subversive associations to reimagine and recontextualize contemporary and historical narratives. The material for my collages comes from a broad range of sources including art history books, photo books, vintage/contemporary magazines, found paper ephemera, etc. In each piece I create, the original image is decontextualized through the act of cutting and it’s meaning re-contextualized through new associations. For example, the draped red fabric in Rubens’s Venus and Adonis might become a bundled head on the body of an ancient Aegean sculpture. By imposing new meanings onto visual material intended for mass consumption, collage provides a means to examine and critique our image-saturated world.

How did you get the idea to combine a live reading from Bay Area artists with your show? What will they be reading?

This idea came from Lori Shantzis, the curator of the show/owner of the space. A.Muse is an SF based gallery and gathering space that has hosted/organized a wide array of events including literary readings, theater, music, etc. Part of the idea of doing a closing with a live poetic response was to broaden the audience while also promoting and building on the “fictional” aspect of my work. I invited three poet friends that I have worked with in various capacities and whose work I greatly admire: Keith Ekiss, Robin Ekiss and Christopher Kerr and Lori invited three poet friends: Ruth Kirschner, Nancy Margulies, and Tamsin Smith. Lori will also be creating an original response, so there will be seven readers in total. For the closing, each writer has looked at the collages in Emic/Etic and come up with an original piece of writing, or poetic response, that will be read live for the closing on Sunday October 9, 2016 (2-4 PM). I am honored and humbled that these brilliant writers are willing to use my works as a prompts, or seeds, for their creative works! 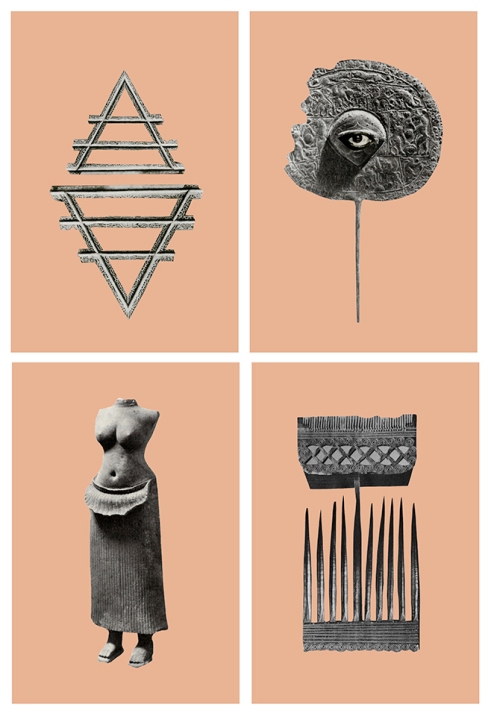 What questions arose for you as you were putting this work together? Were there any unexpected themes that rose to the surface?

I thought a lot about what might be included in a broad ethnographic study, for example, the idea of human rituals and/or common experience. In the collages I imagined rituals around birth, death, male and female sexuality, fertility, weather. In general I wanted the project to evoke universal life themes, but lack any specificity. I aimed to make the geography, rituals, clothing and era represented in the collages intentionally vague. Maps were reconfigured, classification systems changed and erased, landscapes made minimal, scale indicators manipulated, etc.

What corollaries do you see between the Emic vs. Etic western ethnographic interpretation you explore in your work and the modern news media? I can’t help but think of the differences between live social media streaming (Emic) and external news reporting, like press conferences (Etic) in the world of police shootings and the Black Lives Matter movement. What we hear and see from the two different sources are very different and very influenced by the diverse micro cultures within our larger culture. The idea of a micro culture within a macro culture is also interesting, since these kind of details must be left out when ethnographic interpretations are done—there’s always so much left unsaid. What are your thoughts on that?

This is such an astute comment. The space between Emic/Etic is the intersection of objectivity and subjectivity. Social media has allowed for the internal (Emic) voice, or experience to become more powerful and active force in our daily lives. This broadens perspective and hopefully begins to inform and shape the Etic perspective. But as you said, human “objectivity” is a fictional idea. What is considered extraneous, for example a micro culture, might be edited out of the dialog or “research” to keep things more clear cut, or black and white. But the reality is that “the extraneous” is what might be the most important thing to investigate. The gray area is closer to the truth.

Vanessa Wood’s latest show, Emic/Etic, includes collage work from her recent collaboration with Super Classy Publishing and explores the intersection between subjectivity and objectivity in the space of western ethnographic interpretation. The closing reception of Emic/Etic with poetic response is open to the public and will take place Sunday October 9, from 2-4 PM at a.Muse Gallery, 614 Alabama Street, San Francisco.